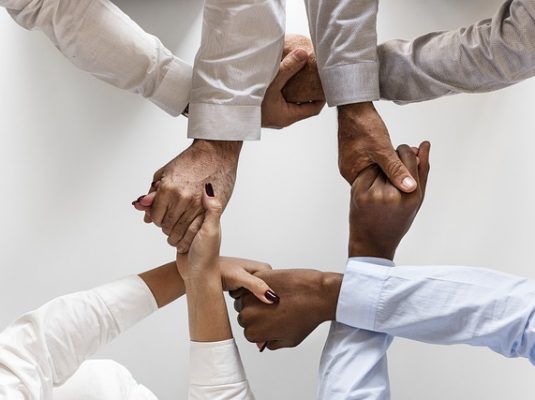 For many years we have known that the optimal team collaboration and creativity happens where an organisation has embraced diversity: where we see flexible working parents, the over 50’s, talented ambitious graduates and school leavers working alongside each other – where employees come from different socio economic backgrounds, different ethnicities, have different abilities, experience and skills set working alongside each other.

I was reminded of an integrated agency we work with called Over&Underhill. Set up in 2014 against a market backdrop of economic uncertainty and skills shortages,  Anthea Over and her business partner Steve Underhill came to see us to ask our advice about talent for their agency – they had just celebrated their second birthday at the time.

Anthea’s first question was: how could they always have a ready supply of the best, most able and hardworking staff who would work well in collaborative, diverse teams?

She explained their need for plucky planners, driven data & intelligent insight experts, sassy social media natives, a small army of able account handlers and new business fiends to work across the paid, earned, owned, shared marketing and communications channels for their clients. Their clients spanned a range of industry sectors with many brands focused on youth, parents, families as well as the over 60s. Their clients had talked in detail about the changing make up of their consumer base and how much more diverse it was becoming. As well as fmcg and consumer brands the agency was pitching for work from an automotive and life assurance client, as well as a crowd funding business.

Over&Underhill had recruited its first 25 staff through friends of friends, past employees and from tapping people up relentlessly on LinkedIn Premium. Now the pipeline seemed to be drying up. It had heard from other, smaller agencies (and some of the larger networks) that the 24 to 38 year old age group, with two to 14 years’ experience, was becoming terribly difficult to attract away from their current jobs and that this group was attracting very high salaries – account managers with just four years’ experience demanding (and getting) £40k salaries for example. London property rental prices alongside the ever increasing levels of student loans that graduates are leaving university with seemed to be putting more pressure on the talent dilemma. All of which was threatening damage to their agency’s business model in spite of it doing well and growing year on year.

We sat back in our chairs and pondered Anthea and Steve’s situation. It was not the first time we had heard it. We all agreed that we’d think laterally for them and, two weeks later, Anthea and Steve came back to our offices to meet a selection of people:

Richard: a retired marine in his late 40s who had reinvented himself as an agency business development expert bringing in over a million pounds in his last year for his employer. Richard could work full time from the Over&Underhill offices.

Sheila: a client services director, now a (young) grandmother with over 35 years’ experience across P&G brands (there is nothing she doesn’t knew about how to market anything in a shopping basket). She also knows a lot about crowd funding as she and her husband (an ex banker) had recently supported two start-ups. Sheila would work four days a week from the office and a day from home. ‘I’m not that interested in climbing the greasy career pole anymore ‘ she had told us at our initial meeting. ‘I love client work and am more than happy to set up others younger than me in the team for career success’. References confirmed that she was indeed the gold dust we thought she was.

Emily and Jeff: similar ages and both were recent second time parents. Emily is an expert planner, Jeff an insight and data professional. They would both work three days a week from the office for the next 18 months and wanted to go back five days a week once their partners had gone back to work. Emily had friends with experience across the marketing mix, all keen to do ‘returnships’ after their parenting career breaks before starting work again flexibly and returning full time over the next few years.

Baz: had been an apprentice for the last 18 months with a social media agency specialising in youth brands – a direct competitor of Over&Underhill. Baz had just completed an Open University degree in psychology after leaving school with two mediocre A’ levels.

Jenna: had completed four, three month long work experience assignments over the year, all on the minimum wage, in a painstaking effort to build her C.V. Her family had arrived in London seven years before and she was determined to break into the PR and marketing industry.

All the candidates were available immediately and all would work on a contract basis first or do a trial period.

Anthea and Steve looked at each other and smiled nervously. At 6pm they reappeared from their interview marathon looking tired but excited. They said, ‘We want all of them; not immediately, but over the next four months or so’. They could hardly believe the skills, experience and impressive work attitude of the candidates or the fact that none of them were asking for ridiculously high salaries. ‘They had all planned so well for their meetings with us. Where on earth did you find them?’ they asked us.

We shook hands and I said quietly that these people aren’t so difficult to find. They reply to job ads and they are on LinkedIn but to most companies they are invisible because their credentials don’t jump out from a C.V. and they don’t fit the cookie cutter template.

Two years on all these people are still with Over&Underhill. They have contributed above and beyond their job specs. Anthea and Steve have a buoyant pipeline of talent (full time and contract workers for when they need additional help) and are known in the agency space for having a unique attitude towards building diverse teams that span five if not six decades of age. Their organisation embraces flexible and portfolio working with enthusiasm, has maintained its good profit margins and levels of client satisfaction are better than they ever have been.

All names are fictional.