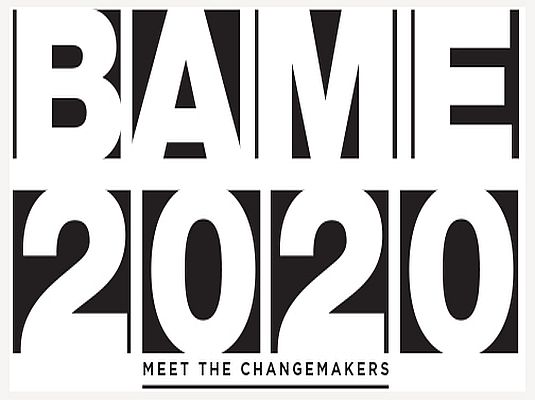 ‘Diversity is the new Darwinism’ was the message from Jonathan Akwue (CEO of The Lost Boys and The Great British Diversity Experiment), speaking at the launch of #BAME20/20, “Meet the Changemakers”, which was held at Google’s high tech offices in St Giles Street, (June 29th).

The brainchild of two progressive co-founders, Amanda Fone (f1 search CEO) and Adrian Walcott (CEO The Sizzle Brand Marketing Consultancy), the launch of #BAME20/20 saw around a hundred individuals including Jonathan Badyal, Policy Adviser to Ed Vaizey, Minister of State for Culture and the Digital Economy, as well as Vanessa Kingori, MBE, Publisher, British GQ Portfolio (named as one of Britain’s Most Influential Black Britons by Powerlist 2016) and major brands such as Channel 4, ITN, Bloomberg, all join together to pledge commitment and support to the growing movement of attracting more BAME talent into the multi-disciplined Marketing, Media and Communications sectors.

f1 search’s CEO, Amanda Fone said that over the years, she had witnessed a ‘stuck record’ where CEO’s and CMO’s ask to see more diversity on shortlists when recruiting senior level marketing and communications talent:  “I have to tell clients that there simply isn’t enough diversity working in the sector – YET!

“Shockingly in the second decade of the 21st century it is still possible to go to a leading marketing or communications industry event and only see a handful of black or Asian faces in the room.  In today’s society, it’s ‘beyond’ time we pulled together as an industry to redress this imbalance and look to ‘attract, retain and grow’ when it comes to securing diverse talent”.

“I believe that traditional search firms are part of the problem, as they can tend to  ‘fish in the same pond for talent’ – but I also firmly believe that they are part of the solution and that is why we have launched f1 search as part of our innovative f1 recruitment group.  It is also why #BAME20/20 is our first initiative – we feel so strongly that we have to evoke change across our industry and put our shoulder to the wheel, or more appropriately; extend the ladder…”

Adrian Walcott (CEO of The Sizzle Brand Marketing Consultancy) and co-founder of #BAME20/20 said.  The real stars of the future don’t just talk about change theoretically   – they go out and make it happen and that’s what our ambassadors are going to do with the support of our Advisory team   “we have to get out there and ‘shake a few trees’.  In parallel, we need to help  organisation’s discover what they need to do with their external communications to attract BAME talent and crucially how to embed cultures that retain them.

“Never before has it been so important to compete with professions such as technology, finance, accountancy and law to attract ambitious and talented young people”.

#BAME20/20 – is a game-changing initiative, which has been specially created to encourage more young people from BAME backgrounds to consider Marketing, Media and Communications as a career of choice – a career that they can be proud to embrace. We have created Ambassador teams – made up of passionate people who are 5-12 years into their MMC careers who will be brainstorming and putting into action imaginative ideas to engage young people, careers advisors and parents to become better informed about careers in MMC. These Ambassador teams are supported by a senior Advisory Group made of leaders in the MMC sector who are supporting, guiding and helping with activation programmes.  Our ambassadors will in turn mentor and support new BAME talent as it enters the sector. The aim is to work towards two goals that 20% of the total young talent that enters the MMC sector each year, comes from BAME backgrounds and that, in time  20% of leadership roles are held by BAME talent.   It is a long term programme committed to sustainable change.

Karen Blackett OBE (chair of MediaCom UK) gave an insightful address to guests highlighting that when she entered the industry at the beginning of her career the management profile was ALL middle white male.  And, she confirmed that 20 years further on – whilst there has been traction on gender balance, BAME remains way behind with only 8% reflecting BAME demographics.

“The MMC industries are vital in how we approach and harness consumer thinking. Right now, research has shown that the messaging that our consumer advertising gives is not on point to reflect the country populous, because it is not being underpinned by the right mix of talent.   And why?  Because MMC teams are not reflecting the general populous.  That’s just one reason we urgently need to attract more diversity into the sectors to ensure that modern advertising talks to everyone in the right way”.

Amna Ahmad, Associate Director at Incisive Health, and one of #BAME20/20  ambassador changemakers   reinforced the misperceptions around traditionalist career paths:

“My own parents expected me to become a doctor, a lawyer or a banker, and pick up a career in ‘professional services’.   It was always hard to convince them that the MMC sectors do represent a professional career” she says “and whilst I went against their wishes, these generational perceptions also must change”.

Amna also highlighted some of the more unacceptable barriers to inclusion, not least the bizarre issue of names whereby, it had been suggested to her that she change her name to ‘something easier’ and made reference to the unconscious bias that still exists in the workplace.

“A colleague who had been trying to get an interview – and been rejected on a number of occasions, changed the name on her application and immediately got an interview.  This is ludicrous – the recruitment and HR industries need to wake up”.

“#BAME20/20 is a key initiative and has real momentum that must be maintained – I am enormously excited at the opportunity to make a real difference and the fact that we are creating a circle of ongoing mentoring and support for new and young talent – by doing something tangible that is far more than just words”.

“It’s not just about ‘attract’ – it’s also about ‘retain and grow’. People often talk of the ‘squeezed middle’ – the fact that we lose BAME talent before they ever reach a leadership role.   One aim of #BAME20/20 is to mentor and advise talent as they progress through their careers; to see more reaching leadership level and more become Marketing and Communications Directors of leading organisations or the CEO’s of top Agencies.

“It is clear from the energy and feeling in the room here today that we CAN evoke change and we want #BAME20/20 ambassadors to be a catalyst for this, working closely with our advisors and creating a circle of onward momentum with new, fresh talent streams.  We have a firm expectation that within the next 5 – 10 years, we will see more BAME talent rise to the very top of our sector”.

Comms – Marketing -Reputation? Who cares?
Go back to home
Agency 2030 Debrief / The Distributed Self